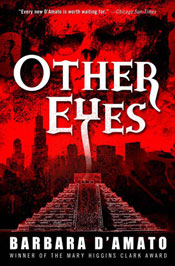 Interstate 90 rises in Seattle, less than ten blocks from Puget Sound, skirts the Seahawks Stadium, and heads east. It ends in Boston, throwing a tail across Boston Harbor to Logan International Airport. Between Seattle and Boston, it snakes across three thousand and eighty-eight miles, the width of the continent. When it passes through Chicago, it makes a shallow sidestep around the base of Lake Michigan.

In Chicago, Interstate 90 fattens to eight lanes, ten in some places, and frequent heavy-traffic entrances and exits are needed. The speed limit is fifty-five, which few people heed. Three hundred and twenty thousand cars go through The Loop on I90 every day.

Just north of the Loop, the road is eight lanes wide with a median of metal posts supporting wide metal guard rails. The right-of-way is fenced with chain link wire.

The baby had found one of the many breaks in the chain link fence. Attracted by the activity of the cars going past, he pushed through the gap. He was a vigorous little boy who had loved model cars even before he was able to sit up and play with them, and now, at the age of eleven months, had his own fleet of plastic cars and trucks. These real ones were even more exciting.

He wore a small pair of waist-hung jeans, which didn't stay up very well, since he had no waist. The top of his diaper bulged out on the left side. In the back, the jeans had slipped halfway down his rump. Now he sat up on chubby haunches to watch the cars.

It was just past noon, late May, and quite warm. The grass near the fence had been mowed recently and was comfortable to settle down on. A duo of early white butterflies danced over the baby. However, he thought the cars ahead of him were more interesting than the butterflies. He got back up on hands and knees and trundled toward the highway. His chubby starfish hands made soft plops on the concrete as he crossed the shoulder into the traffic lane.

An eighteen-wheeler roared by, trailing a slipstream of dust and detritus.

The baby sat back, alarmed, then decided that the big truck, as big as a house from his vantage point, was thrilling, not scary. He giggled and chortled as the dust and papers from the roadside danced in the diminishing slipstream.

The baby patted his hands together. Two or three other cars passed. There was a gap, and then a yellow bus went by. The baby laughed again.

The high sun struck a new section of the metal median divider in the middle of the highway, four lanes away from the baby. He cocked his head at the sudden brightness. Then he smiled toothlessly. The bright strip beckoned.

With great decisiveness, the baby started crawling across the highway to the median, right hand-left knee, left hand-right knee, his little jeans riding farther down as he turtled forward.

Brad Oliver had slipped out of New Trier High School after lunch period, even though he was supposed to finish out the day. He thought hanging around just for gym and then study hall was a stupid idea. Brad had wanted his friend Jay to cut with him, but Jay was such a goody-goody he was staying to the end of the school day. Being fair to Jay, Brad admitted that since Jay had European History last hour, his absence would be noted more than Brad's would.

These last two days were stupid, anyway, in his opinion, with exams Monday, Tuesday, and Wednesday. Why not have a whole week of reading period?

However, Brad's absence would be noticed. He didn't fool himself about that.

Brad figured if he could get to Wrigley Field before one p.m. he could get in line for bleacher seat tickets to the Cubs. Otherwise, there wasn't a chance. Used to be easy, but not since the Cubs went so far last year.

Some things were more important than school.

Jay was going to take the El down to Wrigleyville, but he'd better not get there too late to meet Brad outside. Plus, Jay was bringing Aaron, a senior who was eighteen and could buy beer. Brad would be eighteen next week, but that wasn't good enough if they got carded. They had it all worked out. Aaron buys a large beer. Jay and Brad buy small Cokes, and they spread the wealth.

His parents were way too strict. A little beer never hurt anybody.

Brad got onto Interstate 94 at the Willow Road interchange. It was about twenty miles from New Trier in Winnetka, north of Chicago, to Wrigley Field. I94 merged into Interstate 90 a few miles north of downtown. His old Chevy wasn't running as well as he'd like. He pictured the oil as being the consistency and color of hot fudge by now; he really needed to change it this weekend. The brakes had gotten funny lately, too. The pedal went yay far down before hitting pay dirt. The air conditioner hadn't worked in a year. Brad had all the windows open. He complained about the air conditioner to his friends, but the truth was he loved driving fast with the air rushing in.

But the old tub, which had belonged to his mother, still had a fair amount of go, Brad was pleased to see. He kicked it up to sixty-five in the fifty-five zone. The cop father of a friend of his often said, "We'll give you five and you can take five," which meant they didn't get pissy about ten miles over.

And he'd better push it, he thought, passing a Volvo determined to drive fifty in the middle lane. Arrive at Wrigley after people started lining up and no more cheap seats.

The baby padded determinedly across the rightmost lane of Interstate 90. A Toyota with a Wisconsin license plate sped past in the second lane. The driver briefly had a sense of something pinkish in the road, but it wasn't in his lane and by the time he was aware of its existence he was past it, without knowing what it was.

As the baby started into the second lane, his jeans worked their way fully off his hips. As he achieved the middle of lane two, the pants slid the rest of the way down and he crawled out of them, padding along now on dusty hands and clean knees.

Unaware of leaving the jeans behind, the baby crossed the second lane to the third.

A carpenter in an S10 pickup, with two hundred one by sixes in the back, intended for a hardwood floor, was doing seventy in the farthest left lane. He saw the baby one lane over and was so shocked that he swerved when he didn't need to.

A woman driving a Jeep Cherokee in the third lane saw the pickup swerve, saw the baby in her lane, grabbed for her cell phone to call 911 at the same time as she swerved sharply right to avoid him and braked. A semi, following her, noticed both cars swerve, and without seeing the baby, stood on his brakes.

Farther back, in the second lane, a taxi coming in from O'Hare with a passenger noticed there was trouble ahead and started evasive action, slowing and pulling right from lane two. A terrified driver of a panel truck behind him braked frantically.

The shriek of brakes startled the baby. He was not quite frightened yet, but his single-minded advance toward the shiny median divider had been interrupted, his train of thought broken. He paused and sat down on the white line dividing the third and fourth lanes. His face contracted into furrows of worry.

Brad was behind the panel truck and following too closely. He braked hard, but seeing the cars ahead of him swerving right, stayed in lane. He saw the pickup hit the Cherokee on its right rear. The Cherokee spun out of control sideways, rolling across the two lanes on the right as the pickup sideswiped the metal median dividers and crashed into a guardrail around a median light stanchion, coming to an abrupt halt, while the lumber in its back kept going, shooting across the roadway ahead.

Brad saw the panel truck crank to the right, where it was hit by the taxi. The truck tumbled end over end into the lumber.

At that instant, Brad saw the baby.

The infant was sitting up on the white line, puzzled.

There was just a glimpse of the baby before Brad slammed on his brakes. The pedal went way down, then grabbed. Brad swung the wheel of his car, slewing the old Chevy onto the right shoulder. It hit the ditch and rolled onto its side. Brad shoved himself through the open driver's side window, which was now a sun roof.

He popped out like a cork and sprinted fifty yards back up the roadway, sure he would see a mangled child.

The baby still sat on the white line. A small yellow school bus had just missed him. Its driver had his mouth open as if screaming and the bus fishtailed as it tried to stop before hitting the Jeep Cherokee. A semi and two other cars were bearing down on the baby.

Brad scooped up the baby like a football player snagging a fumble, vaulted to the median and tumbled onto it, cracking his shoulder hard. Crawling over the metal barrier, holding the baby under his arm, he crouched on the far side, just out of the lanes where the northbound traffic was speeding past.

He huddled there as several more vehicles plunged into the back of the wrecks, as one ran into the ditch and struck his car, as northbound traffic began to slow down and gape at the pile-up.

A quarter of a mile back in the southbound lanes was a gondola truck carrying tons of ledge stone from a quarry in Montana to a site in Oak Park where a Frank Lloyd Wright lookalike house was being built. The driver was doing seventy.

As Brad held him, the baby screamed, the first time he had showed fear. Brad cuddled the infant into his shoulder.

At seventy, the truck full of stone covered the quarter-mile in just over ten seconds. The driver saw the pile-up and hit his brakes, putting his full body weight onto his foot, but it was too late. Laying rubber, the screeching juggernaut plowed into the mass of cars and trucks, corrugating metal and pancaking flesh.

Brad leaned against the median divider, holding the baby close. They were both crying.