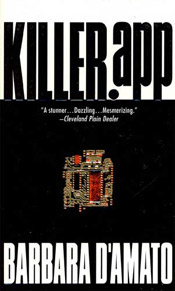 The body floated eight feet above the sandy bottom, suspended in gelatinous green light, facedown, as if studying the bottom. Its arms stretched out from its sides and angled slightly upward, pale fingers curled toward the palms of the hands. It floated a quarter mile off the coast of Michigan City, Indiana. On February 17, the body had been underwater for three days.

A wash of polar air was flowing from Hudson Bay south across the Straits of Mackinac and Thunder Bay, over Lake Superior and due south across Escanaba, Sturgeon Bay, down the full three hundred miles of Lake Michigan. The steady flow had pushed the lake water south, piling it up a foot or two above its normal level at the southern end and floating the body higher off the bottom than it had been the day before.

At the same time, the body moved imperceptibly westward. It remained the same in relation to the algae and small bits of plant material that were suspended around it, but the whole mass inched slowly to the west.

During the day the body made a gradual circuit around the outflow of Trail Creek at the Michigan City Yacht Basin.

Two days later it had cleared the outflow area and was moving west by southwest along the Indiana Dunes State Park, about two hundred feet offshore, in twenty-four feet of water. The winds in Ontario and northern Michigan had quieted and a gentle westerly breeze blew across the lake. The water level in the southern end of the Lake Michigan basin had sunk back to normal. The body now floated ten or twelve inches off the sandy bottom and twenty-two feet below the surface, its knees and the toes of its shoes just barely dragging on the sand.

Despite the westerly wind it continued to drift generally west. Lake Michigan is three hundred miles long north to south and close to a hundred miles wide at the widest point. In the center the lake bottom has a submerged east-west ridge, dividing the body of water into two somewhat separate circulations. In the northern basin, the water circulates in a counterclockwise oval. In the southern basin the water circulates in a clockwise oval a hundred miles long and ninety miles wide. The body was in the extreme southern end of the lake. The circulation moved the body inexorably westward, back toward its home.

By early March, the body was offshore of the harbor in Gary, Indiana, and just beginning to meander around the pier. A sudden storm, with winds upward of sixty miles an hour, tore across the lake from the northwest, bringing sleet to Indiana, closing the Indiana Toll Road, I-80, I-90, I-94, and I-65 and causing the deaths of thirteen motorists in the evening hours of the fourth, which this year was Ash Wednesday.

Under the surface, close to the bottom, there were no waves, no snow, no sleet. The body continued to move slowly west.

Although it had been in the water three weeks now, almost no decomposition had occurred. The water near the botom of the lake was thirty-three degrees. Except for a slightly swollen tongue and a bluish pallor, the body looked as if it were asleep, dreaming peacefully on its stomach.

Thursday, March 5, the body was half a mile offshore, in a hundred feet of water. This water had a milky translucence from the outflow from the steel mills at Gary and Hammond. The body was now moving northwest.

Five days later it crossed an unmarked border between Indiana and Illinois; if it had been on the surface, it would have been in sight of the eastern end of the Chicago Skyway.

On Thursday the twelfth, the body rode and eddy within a hundred feet of shore between the 67th Street beach and Rainbow Park beach. The day was unusually warm for March and both parks were filled with teenagers throwing Frisbees and sunbathing and flirting and trying to drink beer out of Coke cans without anybody noticing. The body passed by just three yards below the surface and kept drifting northwest.

In typical late-winter Chicago fashion, the next four days were bitterly cold, and on the third and fourth days there was snow. Under the surface, the body moved north by northwest in dim amber light. It passed the yacht harbor off 63rd Street, just skimmed the end of the fishing pier, its shirt tugging once or twice on submerged blocks of concrete, and eased slightly shoreward near the Museum of Science and Industry.

When the sun finally came out at five p.m. on Tuesday the seventeenth, the body passed under the long robotlike shadow cast by the Adler Planetarium, and then slowly drifted into the bay area lying off the center of the city of Chicago.

The tour boat Odyssey, beginning its spring dinner tours, passed several yards over the body on its cruise north Wednesday evening. Its prop wash stirred the arms, making the corpse appear, briefly, to be lazily swimming. Then the body eddied into a spot near the light on the south end of the breakwater just off Buckingham Fountain.

For two days, the body washed back and forth against the rock and concrete substructure of the south end of the breakwater, as if it were uncertain whether to go inside, toward Chicago, or outside, back into the open lake.

On Saturday, a northeast wind, shrieking in from Newfoundland, picked up moisture crossing Lake Michigan and blinded off Chicago in lake-effect snow. Chunks of ice broke off the ranges of icebergs that had rimmed the Michigan shore of the lake since late December. The ice washed southwest and piled up into an undulating mass at the bottom end of the lake. Under this blanket, the water levels rose slightly in the southwestern part of the lake, where the body floated. Thousands of tons of water and ice pushed into the baylike area behind the breakwater. Ten-foot waves smashed over the breakwater and flooded into the protected areas near shore. Now that the body lay in only twenty feet of water, it was not as insulated from the effect of the waves. It was quickly carried around the end of the breakwater and into the lagoon of the Chicago Yacht Club.

The light from the sky was broken up by the ice as if by a wall of glass blocks, dappling the figure beneath. Sunday, Monday, and Tuesday, after the storm subsided, the body drifted along the bottom of the yacht club mooring area. It passed around the footings of the mooring cables, touching them gently, easing away. It spent one morning lying against the keel of a forty-foot sloop. Then a chance current moved it off.

It passed a few inches under the white hull of a Chris-Craft motor yacht and the bright blue twin hulls of a little catamaran.

Wednesday night a west wind turned over the water in the bay and the body washed back and forth against the inside of the breakwater, rising and falling with the sloshing of the small basin. The fabric on the blue sleeve started to wear. Holes opened on the fabric over the body's elbows and knees, and then the skin beneath started to abrade. This was the first serious damage the body had sustained, even though it had been in the water for five weeks. Some natural changes had occurred—the skin of the hands had sloughed off. The hair was gone and part of the skin of the face. But because the body was cold and bloodless, it continued to look very much like the man it had once been.

Despite the deep cold, gases were slowly forming in the belly of the corpse. As it nudged past one of the anchor ropes in the harbor, its shoulder caught briefly, and the body rolled over, facing upward toward the night sky.

Thursday morning a few boat owners took the opportunity afforded by the clear weather to do some work on their boats. As the body passed among them, a few caught glimpses of it. One man thought briefly that he had seen an enormous coho salmon. Another was quite sure that a hangover from Wednesday night at the Bucket of Blood had addled his brain.

The Chicago River flows backwards, out of Lake Michigan into the Chicago Sanitary and Ship Canal, to the Des Plaines River, and eventually into the Mississippi twenty miles north of St. Louis. As a result of the backward flow, a gentle but continuous current runs from the yacht club pool into the river area, interrupted off and on by the opening and closing of lock gates.

The body floated along the river, heading west into the city of Chicago. Although the water even here was not more than thirty-six degrees, decomposition had speeded up a bit. The belly was now distended with the pressure of the gases inside, tightening the blue shirt, and the body floated just under water, its belly touching the surface.

The distinctive Chicago Police cap with the checkered band had fallen off even before the body went into the water. The leather holster was in place, though it was empty of its gun. The radio and Kelite flashlight were missing. But the uniform jacket was intact, except for the abrasions on the sleeves, and the navy pants were mostly undamaged, though sodden and without a hint of their crease. The unit designator and name tags were still in place on the right upper chest. His name was Frieswyk.

He had almost floated home.

A family of five from Kenosha was descending the S-curve stairs to look at the river. The mother's eyes passed over the body, not taking it in. The father, carrying the baby who had waked them all at six, was saying, "You have to take advantage of good weather around here when you get it." He didn't notice the body, either.

But the five-year-old girl, who wore a Chicago Bulls T-shirt bought at the sports shop in the Tribune Building nearby, and who had no preconceptionsabout what might or might not be in the icy water, said, "Look at that bald man floating on his back!"

And her four-year-old brother shook his head and said, "He's not, either. He's swimming underwater!"