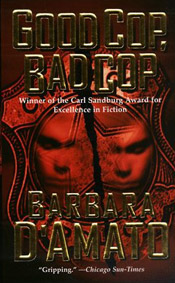 Three unmarked police cars and one unmarked telephone truck sped west on Madison Street. Though the men didn't know it, every move they made in the next hour would be examined, cross-examined, deposed, praised, vilified, and chewed over in press and in courts for decades to come.

It was December 4, 1969, a cold Chicago winter, still three hours to dawn, windy and dark. In the cars were fourteen men led by Chicago Police Sergeant Daniel Groth. Some were detailed from the Cook County State's Attorney's Office SPU, the Special Prosecutions Unit, and the GIU, or Gang Intelligence Unit, which was the local "Red Squad," and some were on loan from the Chicago Police Department. All wore black leather jackets and fur hats. None wore a uniform. Among them they carried one Thompson submachine gun, three 12-gauge riot guns from the Chicago Police Department armory, an M-1 carbine, and a sawed-off shotgun. They had their usual sidearms as well — twenty .38-caliber handguns and a .357 magnum. Their ammunition included both standard-issue and lethal nonstandard-issue rounds: dumdums and hollow-point bullets. They carried no nonlethal crowd control equipment, such as tear gas.

The cars rolled silenty through the dark streets until they were within two blocks of their destination. Only then did they inform the local Thirteenth District police dispatcher where they were going.

They glided to a stop 150 feet west of their target, 2337 West Monroe Street, climbed cautiously out of the cars and picked up their weapons.

The houses along the street were dark. Some of the buildings were actually dead, burned out the year before in the riots of 1968, their windows blank, interiors collapsed and decayed, the floors drifted with dirty snow that had blown in through the ruined windows. No one walked past on the cracked sidewalk.

The men had been briefed by Sergeant Groth. They had carefully studied the elaborate floor plan an FBI informant had drawn for them, showing a first-floor, four-room, two-bedroom apartment, detailed even down to the beds where the targets were likely to be sleeping. It pinpointed chairs, tables, the television set, a hassock. The front door of the apartment led into a hall with a closet dead ahead and a door into the living room on the left. The back door was up seven steps and had a window on its right. The entry led directly into the kitchen, with the stove on the right and the door into the rest of the apartment in the wall straight ahead.

The youngest men detailed to take part in the raid had been told only that this was the lair of dangerous and vicious leaders of the Black Panther party. They were warned that there was a secret cache of Panther weapons in the apartment, which were intended for use in a revolution. The purpose of the raid, they had been told, was to seize that cache. They were told to expect violent, armed resistance, possibly a shootout.

The youngest of the officers was a slender white man with black hair. Somebody said, "Come on, Nick," and he padded softly up to the front door with his team. His heart was beating fast and he was swallowing frequently, hoping his fear and tension didn't show. He kept his eye on the sergeant.

The sergeant rapped on the front door. There was a sound like "Who's there?" There was a shot. Another senior officer kicked down the door and went in first, low and shooting.

The young officer heard a shout, a crash, a shot that sounded like a carbine, then a shotgun blast, then a fusillade of submachine gun fire and screams as the night shattered around him in blasts of sound. He burst into the hall, from there leaped to the left into the living room, pitch black inside except for the flashes from gun muzzles. In spurts of this stroboscopic light, he saw a man lying on the floor bleeding, a woman on a mattress screaming, and officers firing through the back wall of the living room and through the darkened doorway into the bedrooms. There was a flashing sequence of bodies jumping, dodging. There were shots coming from the back of the house. He saw a movement beyond the door and fired. The leading officers leaped into the next room, a bedroom, while the young man and two others stood guard in the living room. There was a brief lull.

Another battery of shots, shouts, submachine gun rattle and the visceral impact of shotgun blasts. He thought, Wait! Are we firing at each other? Then he asked himself whether he was supposed to run in and help, but nobody had told him to, so he stayed, half crouched, weapon at the ready.

Suddenly, it was as silent as before, except for curses and sobs.