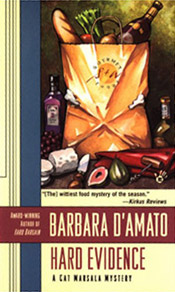 It starts with a soup bone.

Chicago freelance journalist Cat Marsala, relaxing at home after a long week's work reporting on the city's best restaurants, looks forward to a quiet evening with her semi-significant other, Dr. Sam Davidian; her parrot, Long John Silver; and her temporary houseguest, a Dalmatian named Dapper. As a special treat, Cat buys Dapper his very own soup bone at Chicago's most elegant and exotic food emporium, Spenser and Angelotti.

The Dalmatian is delighted with his bone, but his euphoria is short lived when Sam, a trauma surgeon, snatches the bone away. One close look tells Sam that he and Cat will not enjoy the romantic evening they'd planned.

The bone is human, probably part of a large male's leg, which suggests two immediate problems: a murder may have occurred at the Spenser and Angelotti store and a potential health hazard may exist in the store's butcher shop and meat cases. Cat's purchase was packaged in plastic, tucked in next to the beef, lamb, and pork.

How much meat has been contaminated? How many other customers will face similar surprises?

Cat gets on the phone to her longtime friend, Chicago's chief of detectives, Harold McCoo, who with the mayor, the medical examiner, and other officials, agrees to a deal. The store will do a five-times-your-money-back recall on its meat, and Cat and the cops will have twenty-four hours to find a killer before the story goes public and Spenser and Angelotti's reputation is trashed.

Co-owner Bruno Angelotti, desperate to preserve his beloved store's reputation, brings in Cat to work undercover in catering. If she has a good reason to be in the store, she can ask questions more easily and observe the employees in unguarded moments. Is one of them a killer?

When Cat's car windshield is broken as a warning, it's clear that somebody, at least, does not want Cat nosing around Spenser and Angelotti. And that's only the beginning in a dangerous case that takes Cat and the reader deep inside the intriguing worlds of specialty foods and funeral homes. Somebody will stop at nothing, even another murder, to obscure the evidence of one of the most bizarre crimes Cat has ever encountered.

Kirkus Reviews:
"The driest and wittiest food mystery of the season."