BOOKS: Death of a Thousand Cuts 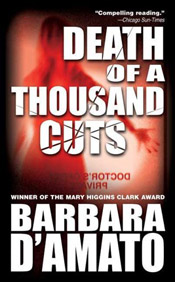 The moment a man begins to question the meaning and value of life, he is sick.
-Sigmund Freud, 1937

Jeffrey Clifford sat in the passenger seat of his sister's Mazda, hesitating to open the door. He stared across the wide expanse of heat-seared lawn at Hawthorne House, the huge 19th century mansion looming fifty yards away. Walls of blood-red brick rose from a stone substructure, with three stories of narrow arched windows like squeezed eyes. There were gable eyebrows over the third-story windows. On top of each gable was a sharp wrought-iron point. A steep roof of black slate rose from the third floor. Along its peak ran a wrought-iron railing crest topped with alternating spear-points and balls. At the tip of the roof ends—there were four because the building was cross-shaped like a cathedral—iron lightning rods rose up, each ten feet tall. The five brick chimneys that also shared the roof were funnel-shaped, with the widest portion flaring out at the top. There were eighteen bedroom gables on the third floor.

Jeffrey liked to count. He always felt better when he knew just how much there was of everything.

As Jeffrey knew from experience, there were also four little servants' cells huddled up under the roof on the attic floor. Twelve bedrooms occupied the second floor, along with a gigantic ballroom in the center. Jeffrey had not seen the mansion in years, but he knew it by heart.

What sort of family would ever have believed themselves so important that they needed a pile like this for a home?

"I can not. Go in there," he said, in his stiff, oddly patterned voice. His sister Catherine said, "Then don't. You don't have to."

The mansion faced west. On this hot day in mid-July, the sun was still quite high at six p.m., but the light was taking on an orange tinge of late afternoon. The red brick burned in the light.

"You've never been back since you were a child, have you, Jeffy?" Catherine asked.

"You've never even been driven by?"

With a rising note of hope in her voice, she said, "So you must see it now as a grown-up. It must look smaller. And less scary."

He couldn't explain. He was never good at explaining himself, anyway. This hideous, dangerous, poisonous house of the sharp points and narrow windows—a façade like a headache—had only grown uglier over the years. The massive walls of meat-color bricks would crush him. The air inside would be foul. The rooms would be dark and the carpets dredged in dust. And inside, relishing the foulness, would be the toxic warlock who wanted to eat young children, bite by eager bite.

In his oddly patterned way, he said, "It was not. An ennobling idea to come here."

He put the dufflebag on the curb and got out of the car. He slammed the door, which made a tinny, cheap-car thwack. The air conditioner hadn't worked in years, so Catherine kept all the windows rolled down. The temperature had reached a hundred and one degrees in Chicago today, the radio had told them, the third day in a row over a hundred.

Trembling, Jeffrey hung the dufflebag strap over the crook of his arm. His other arm was bent too, the elbow held next to his body. He said carefully, "Thank you for. Driving me."

"Mom always said you. Could never park anyplace within ten. Blocks of the University of Chicago."

"You're going to be hot in that tight vest."

He ran a hand over his chest. In addition to his shirt, he wore an old leather vest he'd owned for years. He liked familiar things, never wanted anything new. The vest strained at the seams even though Jeffrey was slender, and that, plus its scruffy appearance, bothered Catherine. She wanted him to look good, especially this weekend, seeing people he had not seen in years.

He didn't dare look back at her. If he did, he'd turn right around and get in the car.

"That is the present plan."

Jane Macy walked slowly toward Hawthorne House. She'd had to park five blocks away, but that didn't bother her. She liked hot weather, even really hot weather, like this, and as she approached the building, she felt pleasantly warmed rather than uncomfortable.

Her little overnight case hung by its strap from her hand. She was rather proud of it. It was powder blue with stitching in a contrasting navy, soft-sided top-grain leather, round, like a huge pocket watch, and filled with thoughtfully-designed compartments.

At the junction of the sidewalk and the Hawthorne House walkway, she paused. The mansion rose up before her in the late afternoon light. It was so large that from her place on the walk it occupied almost all her visual field. The building wrapped its arms around her. The red brick glowed warm and inviting. Even the antique glass in its windows gave back a mellow amber shine.

She smiled at Hawthorne House.

It wasn't just the warmth of the old building that pleased her so much. She craned her head back and smiled at the whimsical pagoda-points of the lightning rods, the funny wrought iron decorative railing that ran along the roof peak. A wrought-iron fence, similar in style, surrounded the property on the sides and back. Then there were the gables, each with its own fancy little pagoda-like peak, and the slate roof tiles, scalloped like cookies at the edges. And the tall brick chimneys, five of them, that flared out at the top, almost as if they were upside down. Whoever saw chimneys like that these days? The architect must have been having such fun designing them.

Of course, she was well aware that her feelings toward the building were heavily colored by her warm feelings toward the six years of her life she had spent there. Psychiatric counseling had trained her to be conscious of the effect of emotion on perception. She was good at watching for these connections. Almost, she said to herself, doing it automatically by now. With a little bounce in her step, swinging her overnight case in expectation of a delightful weekend, she sashayed up the walk to Hawthorne House.

A hand-waxed black limo, longer than two Mazdas, slid to a stop in front of Hawthorne House, tires sighing on the pavement. The driver, wearing a two-piece gray uniform suit, got out and marched around to the right rear passenger door. "Dr. Schermerhorn," he said, opening the door with a white-gloved hand. Although the limo was air-conditioned, the driver had started to sweat the instant he stepped out of it into the street.

The man who exited the passenger seat was tall, with silver hair and a neatly trimmed silver Van Dyke beard. He wore a light summerweight three-piece English suit.

While the driver extracted the deerskin valises from the trunk, Dr. Schermerhorn studied the building before him.

Commanding, he thought. Elegant. A wonderful example of Midwestern faux Queen Anne. I knew the first moment I saw it that this was the place to establish my institute.

Hawthorne House had been the home of the Cyrus Hawthornes. Built in 1881 by the Chicago architectural firm Treat and Foltz, it had been ahead of its time in conveniences—modern plumbing and steam heat—even if a bit excessive in design.

The Hawthornes lived at Hawthorne House through two and a half generations, until Frederick Hawthorne lost his fortune in the crash of 1929, and moved out of the house forever in 1931. A white elephant as a family home, it became a finishing school for young ladies in 1933, after lying empty for two years. Its nearness to the University of Chicago helped its recruiting efforts. Hawthorne House housed thirty young ladies at a time and graduated fifteen of them each year after a two-year course. They learned deportment, penmanship, sewing, how to speak properly, how to set a table properly, and how to entertain with grace. But by 1960 young ladies did not want to be "finished." They wanted to be educated in a profession. Hawthorne House struggled along as a collection of offices. Several doctors practiced there, a few lawyers, and on the third floor were the editorial offices of a small but highly regarded academic press that turned out well-regarded but rarely read books.

Hawthorne House had not succeeded as offices. It was too far from the business district of the Hyde Park area of Chicago. When Dr. Schermerhorn saw it in 1968, only seven of a possible twenty office suites were occupied.

He knew the instant he laid eyes on it that it was perfect for his residential treatment center. Big enough for two dozen patient bedrooms, plus offices and schoolrooms, it was massive and therefore conveyed the solidity and respectability he wanted to express. The woodwork inside was elegant, despite some vandalism done by driving doors through several interior walls to produce office suites. There had been cheap remodeling performed on the beautiful ballroom to subdivide it into small office cubicles.

Wundershoen, Schermerhorn thought as he looked at the building now, twenty-seven years later. Those tall, stately windows. The assertive roof treatment. And that muscular brick, a wonderful masculine color as rich as aged mahogany. A building in charge of itself.

There would be reporters here within an hour, an hour and a half at most. Time enough to get to his room and change into the new Brioni suit. His publisher had said Susan Somebody from Time Magazine would be here. And early yesterday his office had received calls from "Dateline NBC."

Good. Let them come. And confusion to my enemies.