AVAILABLE FROM TOR/FORGE:
OTHER EYES 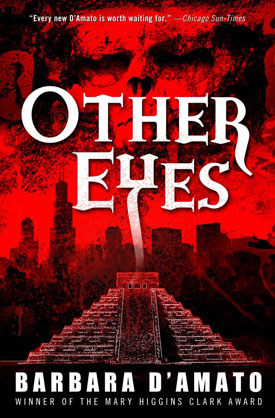 "Like Mary Poppins' ordinary-looking carpet bag, which reveals hidden and unexpected surprises when opened, Barbara D'Amato's carefully structured thriller offers much the same experience.  There are surprises and delights around every corner... [Other Eyes is] seamlessly readable... She's one of the best at what she does and it's a delight that she's returned after such a long absence.  This is a fabulously entertaining read."
—Robin Agnew, Aunt Agatha's Bookstore

Blue Eriksen is a famous forensic archaeologist based at Northwestern University. She and her team are traveling the globe, testing mummies to research the use of hallucinogens in the development of ancient religions. Armed with evidence from ancient peoples, Blue has become convinced that psilocybin—a hallucinogen derived from mushrooms—can prevent or cure drug addiction. She hopes to develop testing and treatment centers.

Leeuwarden Ltd. is the cover name for a deeply secret international organization that facilitates the production, delivery, and sale of illegal drugs worldwide, much as OPEC facilitates the sale of oil. Leeuwarden considers Blue a long-term threat and sends Felix Hacker—one of their enforcers—to kill her. Blue has no idea she's being stalked and prepares for a dig high in the Peruvian mountains...

Read an excerpt from Other Eyes